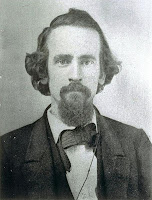 Join us for an exploration: How the world really works, & how it would work, with Henry George - workshop facilitated by Mike Curtis
October 18, 2009, 10AM to 2pm. Bring a lunch. Light refreshments and snacks provided. Suggestion donation: $5
Make a distinction between the Earth itself and the results of human endeavor .
See what sets wages as an amount and as a portion of what's produced.
Consider the relationship between the owners of buildings & machines and those who use them.
Trace the cause of unemployment, recessions, and depressions.
Learn the formula: common opportunity, individually produced property, and the sharing of community produced property with sustainability and abundance for all.
Examine land rent and the potential of a community land trust.
Henry George was the world's most famous economist. His book Progress and Poverty was only out sold by the Bible in the 19th century. His work was translated into almost every language in the world. John Dewey said the following about George, "Henry George is one of a small number of definitely original social philosophers that the world has produced," and "It would require less than the fingers of the two hands to enumerate those who, from Plato down, rank with Henry George among the world's social philosophers." His ideas so radical, progressive, and true have been largely ignored by modern economists who see them as a threat to modern capitalism.
Seminar Leader: Mike Curtis, former Dir. Henry George School of Social Science, NYC; Trustee and life long resident of the Arden Land Trust in Delaware, School of Living member.
Please RSVP to Bob Flatley e4bob@yahoo.com or 814-355-0850 if you plan to attend this important workshop!
Posted by Ahimsa Village at 8:07 PM